As part of this year’s ‘International Women in Mountain Biking Day’, IMBA Europe decided that one day wasn’t enough to celebrate all the amazing women in mountain biking. So every Wednesday throughout May we will be sharing a #WomensWednesday story from some of the women doing great things in the mountain biking community.

My passion for mountain biking

My name is Sarah Wälde and my biggest passion is mountain biking. I love riding all different bikes (road bike, gravel bike, mountain bikes), but I feel best on the trails – no matter if I am on my cross-country fully training for the next cross country race or if I am carrying my enduro bike up to a summit in order to enjoy the trials down (hike & bike). I bought my first mountain bike 11 years ago, and I got completely into this great sport during my 3-year postdoc time in New Haven/ Connecticut. The northeast of the US does not have high mountains (at least where I lived), but the trail parks there are just amazing. 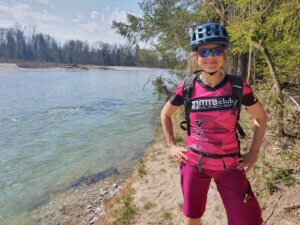 My husband and I joined the MTB-Club Munich in 2015, when there were only 100 members. Flash forward to 2021 and MTB-Club Munich is the largest cycling club of the city and in the top three within Bavaria (+ 450 members). It is a clear sign how much the sport has grown in past years. The club has made a real effort to become inclusive and represent all demographics. Currently we have a group of 80 – 90 kids/teens in the club, as well as a strong following of women with around 100 members, almost ¼ of all our members!

In the past, our club has supported several initiatives to give back to the trails- Isar-ramada: which was a campaign to clean up our trails during the month of October. We will again be initiating such an event this fall. Furthermore, I organized a trail maintenance event last September together with the MTB section of the German Alps Club (DAV). 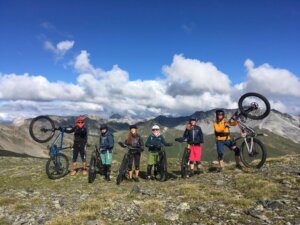 Throughout my life I have always been in some sort of sports club. In 2017, it was my first time being elected to the club board as secretary (writing all the meeting protocols and taking care of the members’ administration). My involvement since then has continued to grow and in 2018, I initiated the Munich MTB Kids Cup, along with 3 other clubs, which was a racing series targeted at beginners/newbies.

Over time my role within the club has evolved and my new position is as club representative. The board has also grown since my time starting with the club, and we now have almost equal representation of males and females, with 3 of the 7 board members being women.

Within my new position, I have also started to get more involved with trail advocacy in the region. My husband Joerg, who is responsible for the race sector of the club, has been representing the club in external trail meetings, and I now too join in on those meetings.

The challenges to gain trail access in and around Munich 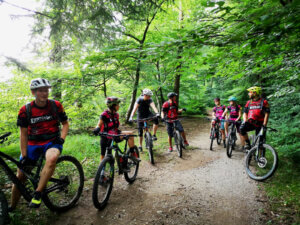 Our largest project at the moment are the so-called Isar trails – official hiking trails starting in the south of Munich. The project officially started in 2010, and in 2014 a round table started with representatives of the nature conservation, cycling association (DIMB, ADFC, German alps club – DAV, MTB-Club Munich) and the so called club of the river Isar valley. It was run by the district office. Lots of voluntary hours were spent as well as money invested for expert opinions and finally in 2017, we got a result. The compromise was to have one official route east/ west of the river Isar: This proposed route was recommended to be used as a ‘shared trail’ with pedestrians. Within the route there were designated ‘rest zones’ where pedestrians or bikers were forbidden in order to protect the flora and fauna. It appeared that a good compromise had been made, and that local riders would use these new recommended trails. The initial agreement was that funding towards trail maintenance as well as rangers should be shared equally between the City of Munich and County of Munich. The plan was to begin construction at the start of 2018, however nothing has happened until now (2021). Unfortunately it is a little too late, as we have seen a huge increase in trail usage over the years/months, which has been exacerbated by the Covid-19 pandemic. People haven’t been able to travel, so we have seen over usage of the trail networks, lack of maintenance, and as a result the building of more trails (illegally). All parties of the round table ask to finally start with this decision made in 2017. However, it seems that the county of Munich has decided to come up again with the liability issue and commissioned another expert opinion. The latest development is that they think a ban on certain trails is the best solution due to insurance etc. This means, we are back to 2010. The complete process would have been for nothing, only a small number of trails are allowed to use if at all. 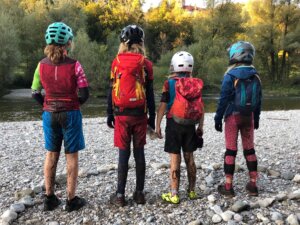 We have approached both the County of Munich and City of Munich, but it is all very slow and it seems they do not want to take up the conversation again… As it stands, we are not yet banned from the trails, but we are waiting for the moment this might come. What options do we have now? Well we are thinking about doing more publicity work to engage with the critical masses. Recently, we mountain bikers have had several positive contacts with the newspapers, radio, and TV networks. It is important to increase the awareness to our community of the importance of trail access and why we are fighting so hard for mountain bike specific trails as well as more shared trails. What we have found to work is portraying the mountain bike community in a different light to what people often come to think of us as (Redbull/ extreme sports guy flying downhill at a crazy speed. We are husbands, wives, children, families who just want the opportunity to ride close to home.

One big problem is that the area of the Isar valley is a landscape conservation area. But there are other areas like this in Germany where mountain biking is allowed, so we don’t understand why it is such an issue here in Munich. There are so many positive examples in the greater Munich area with shared trails concepts (alpine region, still ongoing) etc! It is not easy there as well, but at least the authorities are kind of open for discussions. But Munich seems to be special…

One other aspect of the 2017 result was to find alternate routes in Munich for mountain biking. One good spot is the so-called Fröttmaninger Hill in the North (right next to the arena of Bavaria Munich). This hill is an old organic garbage dump, but open to the public. It has 60 m elevation and some unofficial trails. The MTB-Club Munich has had two Kids Cup races there, but unfortunately we had to stay on the roads. The horticultural office did not allow much in this city. We were told in so many words that ‘there are sports which shouldn’t be played here in Munich, would you please go to the rural areas with your kids and to the alps’. Well thank you…

Coming back to the use of this ‘garbage hill’ as a place to create trails, we actually found a company which created a trail concept for 11 km trails on this hill! I contacted all parties of the Munich city council. We were invited by the green party and introduced them to our trail center plan. We as the MTB-Club would agree to overtake the maintenance, insurance or so, but not the initial costs for building these trails. We were quite successful in our discussions with both the social party and the conservatives. In the end, there was a city council proposal in June 2020 to ask the City of Munich to make this trail center possible.

However, the horticultural office and one other authority declined it completely. Their reasoning? Was apparently the gases created by all the trash under this mountain could be disturbed and released by such activities…. To make a long story short, 10 months later, nothing has happened and Mountain Bikers are basically just not welcome in Munich. There is a pretty flat forest in the south-east of Munich. Well, not perfect, but a well-trained trail shaper can also build something fun there. But for any built meter of trail, a compensation area must be found. Hardly possible in a city like Munich where every green area is rare.And what are we left with? If mountain bikers cannot mountain bike in their local area due to lack of access, then they will take their hobby elsewhere which is not a solution either. We saw an increase of mountain bikers going by car to the Alps which can create conflicts with the rural population and the people from Munich – everyone is just looking for some fresh air.

Where to now for Mountain Biking in Munich?

We spend lots of hours here at home discussing these issues, looking for solutions etc. Jörg clearly has expertise regarding law, insurance etc. I have the patience and the right tone communicating to the authorities and political parties. In our external round with DIMB, DAV and ADFC, I am the only woman. When I am at the official meetings of the Munich parties (they organize events for sports clubs, here you have the chance to talk about your clubs problems – well, before Corona). There aren’t many women participating, and I am mostly among the younger ones. But I have never felt any sort of issue or barrier, it was mostly positive.

Within the MTB-club and the Munich bike community, we try to make the riders aware of the trail rules, asking for support here and there when we do a trail event.The problem we face is that if trails aren’t made available to ride on, a lot of the youth will just build their own trails, not knowing actually how damaging this could be to the environment, not to mention our image. I am reaching out to other clubs with similar problems to hear about their experiences, networking is always good. At the moment, I am in close contact with a young lady who is writing her bachelor thesis about the concept of a positive steering of mountain bikers, also in the context of environmental safety. Maybe there are some new insights which help us here.

As a closing statement, I would like to see more women in leading positions in cycling clubs and on special committees/ working teams. I feel very comfortable in my role and do not have the feeling of being disadvantaged. I have the feeling that talking as a woman for a MTB-Club could grant you more of an audience.