The Take Care of Your Trails campaign is based on a succesful pilot running for 2 years in Scotland by Developing Mountain Biking in Scotland (DMBinS). In 2017, IMBA Europe adopted the concept and worked in partnership with DMBinS to turn TCOYT in a pan-European event. The objectives of the TCoYT campaign are to promote trail stewardship & improve the image of our sport, to recognise the work of many MTB volunteers, encourage new or strengthen existing partnerships and to protect the places we love to ride. The 2022 campaign will officially start on the 22nd April and finishing off with a bang at our 10th anniversary Summit in Val di Sole on June 4th.

Another Covid edition- Considering most countries were still in some form of ‘lock down’ during this period, we were extremely impressed by the level of engagement from all the groups that participated in 2021. In total, 92 activities took place in 15 EU countries. More than 1000 volunteers contributed approx. 6700 hours of volunteer work. A huge THANK YOU to all trail crews, local heroes, partners and sponsors that contributed to the 2021 campaign!

Once again, our trail crews went above and beyond in finding ways to safely organise trail maintenance work or trail clean ups in compliance with COVID measures. In order to spread the love in 2021, we decided to have 3 sub categories within The ‘Outstanding Trail Crew’ award.  These crews distinguished themselves by innovative and refreshing trail projects; by making a positive contribution to the local community, by protecting the places they love to ride; by creative volunteer recruitment strategies or by ways to make the MTB community more inclusive. As per every edition, we take the time to recognise and reward the individuals who go above and beyond for their trail associations, with the ‘Trail advocate of the year’ award.

And the winners are…

Inspired by the success of the previous ‘Take Care of Your Trails’ campaign, IMBA Europe decided to go ahead with the 2020 edition, albeit a little later in the calendar than initially planned. Even with the added logistical challenges associated with the various covid restrictions, the campaign was a huge success with approximately 750 volunteers between 74 events in 15 different countries, contributing more than 6500 volunteer hours. Given the tough circumstances, and the inability to organise events on the scale as we have come to know previously, we were extremely proud of every participant and crew that took part in the campaign in 2020.

There is no lack of passionate riders but sometimes we simply forget to give the tireless advocates the recognition they deserve. Especially in this COVID year, when trail usage heavily increased and new riders entered the sport. A super positive development to see more people on bikes but it also put a lot of pressure on local MTB advocates in terms of solving or preventing social user conflicts, preserve trail access, align with different recreational user groups and land managers. During the TCoYT campaign, they also had to find creative solutions to do trail maintenance work or trail clean ups in compliance with COVID measures. We were extremely pleased to announce the winners of the 2020 Trail Advocates of the year were Mike Hanson and Corinne Dutetre.

In its third year running, the TCoYT campaign attracted record numbers of volunteers with just over 2500 people across Europe lending a hand to clean up and maintain our beloved trails.  Throughout the month of May, a total of 152 events were organised across 15 countries, throughout Europe with more than 15,000 volunteer hours clocked!

Once again, the competition among trail crews to win “Outstanding Trail Crew” was a tough one to pick. There were many outstanding efforts and events organised,  and in the end, four trail crews were chosen to receive the proceeds from the raffle draw prize. The winning groups were Golovec Trails from Slovenia, The Mountain Bikers Association France, The Aberdeenshire trail association Scotland and West Coast trails Italy.

In 2018, more than 1640 volunteers took part in TCoYTW campaign, a growth of + 35% compared to 2017. The campaign highlighted the fantastic voluntary contribution these groups and volunteers made towards their own local trails.

Another important result was to to see these trail maintenance events were no longer one-off actions but activities that became embedded in the local mountain bike scene and helped to attract new volunteers or to generate positive local publicity.

With support of EWS manager director Chris Ball, the results of the campaign and award ceremony took place at the 3rd round of the Enduro World Series in Olargues, France. With passionate comments of EWS board member Enrico Guala, France was awarded ‘best mountain bike community Europe’ of the 2018 Take Care of Your Trails campaign.

As trail advocacy association, Mountain Bikers Foundation was the national coordinator of the TCoYTW campaign and managed to mobilize 34 groups to work on 54 sites with 594 volunteers. Commendable was also the local and regional media coverage of the French TCoYTW actions, the partnerships with regional parks and collaboration with the bicycle industry. Local MBF volunteers also helped to repair some trail sections of the EWS stages afterwards to minimize the impact of the event.

New in 2018 was the launch of the Trail Heroes fundraising campaign to support a number of local trail crews that joined IMBA’s Take Care or Your Trails Weekend. With great support of Specialized Bicycles and SRAM that pushed the Trail Heroes campaign, four local volunteer groups received a supporting grant of €500. The funds were spent on trail inspection training, restoring ancient trails, improving the sustainability of trails and a school project to get more kids into mountain biking.

The co-ordinated weekend of volunteer trail maintenance was a great success and highlighted the fantastic voluntary contribution that bikers make towards the key ingredient in their experience: the trails.

The weekend was also a chance for each country to engage in a friendly competition to see who could get the largest number of volunteers to attend sessions per head of population.

Slovenia won with 420 volunteers including the president (!) of the Republic of Slovenia. The Slovenian campaign resulted in so many positive publicity and engagement by local groups, that winning the title of Best MTB Community in Europe made it on national television and radio. The Slovenian mountain bike community was amongst the last 3 candidates to be nominated ‘best sports Slovenian sports team’ at the annual sports award ceremony 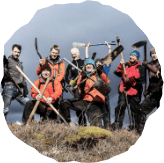 Become our trailfriend and help us to maintain our trails at its best.