As part of this year’s ‘International Women in Mountain Biking Day’, IMBA Europe decided that one day wasn’t enough to celebrate all the amazing women in mountain biking. So every Wednesday throughout May we will be sharing a #WomensWednesday story from some of the women doing great things in the mountain biking community. 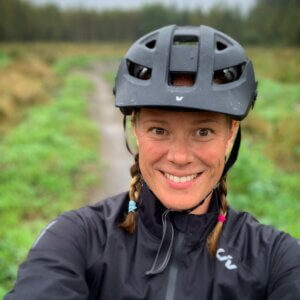 How did you get into mountain biking?
I have always loved biking but it was my boyfriend (now my husband) who introduced me to mountain biking. I started out on a heavy, no suspension nowhere type bike, and it took me many years to actually become a ‘mountain biker. It might have had something to do with that bike haha. 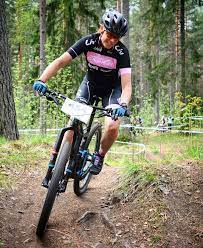 Who inspired you to start riding?
The one who really inspired me to take my mountain biking further was other women. Especially one woman, Carina Börjesson, who told me how she got sick of handing bottles to her husband when he competed. So she started to compete herself, at the age of 39. She and her husband Benny Andersson, who both have tons of medals between them, helped me a lot when I began to compete. I was very green to all difficulties a xco track offered, but the goal was set at masters world championship in Norway, that same autumn. I had a very busy summer trying to become good enough. 😉 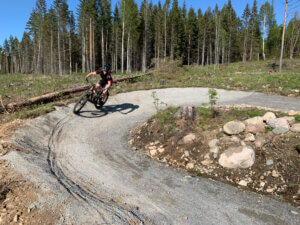 What is your favourite discipline?
After that first summer competing in xco, I found out that xco was not what I did best. Nor was it marathon. I was a sprinter. Two minutes long races were my thing. Unfortunately the world champs track took a lot more than 2 minutes to ride. I have never ever been as knackered as after that race. But after a few days, or weeks, I found myself planning for the next world champs. And after that I suddenly started to ride cyclocross too, and competed internationally in that discipline as well. I have also tried enduro and downhill just for fun. But my favourite discipline? That is taking my bike, some friends and just to ride in my local forests on our local trails. 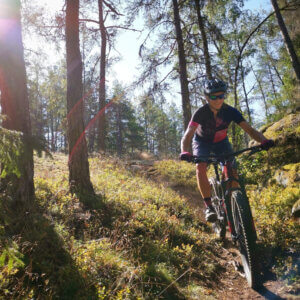 Favourite place in the world to ride?
Despite the travelling I have done for competitions, I haven’t been around so much for riding more for leisure. I have done some though and riding in the alps for example is fantastic for someone like me, who mostly ride roots and rocks in the forest. The scenery is amazing. To ride something different from home thrills me. To see something different. But it doesn’t have to be far away. When it comes down to it, I do appreciate the variety of riding Sweden can offer. From the lush beech forests in the very south to the wild sensation of riding in “Fjällen” the Swedish mountains. From riding smooth singletrack with no obstacles, over flowery fields into thick forests, trying to keep the balance and momentum over rooty and tricky terrain to rocky and even more tricky terrain within just a few miles. Our right to roam, the public access, and the huge amount of trails that Sweden can offer nowadays, is really hard to beat. 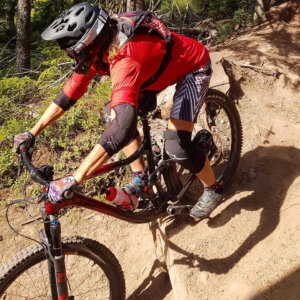 Can you explain what Bergslagen does, and what your role within Bergslagen cycling is?
Bergslagen cycling is one of Sweden’s largest cycling areas, which came through after an idea I had and the interreg project (Central Baltic cycling) that made it possible. I worked as a project manager for 7 years for our huge area, which covers more than 4000 km of bicycle routes, with over 1200 km of signposted mountain bike trails. After that, I resigned to work full time in my own company. 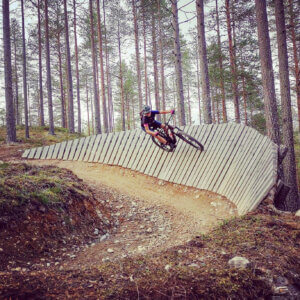 You mentioned also starting a new business? Could you share some more information about your new business?
I started my own company even before Bergslagen cycling. I actually started it to be able to run camps for women. I wanted to inspire more women to ride mountain bikes, the way I had got inspired. The company have, since then grown, and so has my interest in developing cycling in Sweden. Nowadays I mostly help other areas to create their bicycling trails, areas and business. I work all over Sweden. I also train other guides and instructors who want to start their own business and guide or train other people. To add to everything else, me and a partner run a project to create a big flowtrail-area right where we live. Despite the fact that our hometown already has 220 km of signposted mountain bike trails, that came true due to my very first cycling project, 10 years ago. We think it is time to level up. 😉 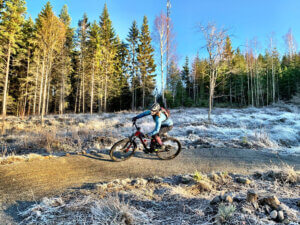 Since the demand has been fairly high for my company, I recently got together with four partners to create Svensk Cykelutveckling, (Swedish development of bicycling), which is a consult-team with experts covering everything from planning the projects, analyzing groups of interest, applying for financing, support with creating new areas or business and helping to perform security checks of trails and constructions. Unfortunately the website is just in swedish.  www.svenskcykelutveckling.se 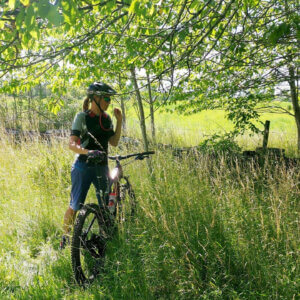 What do you believe to be the biggest challenges associated with mountain bike growth in Sweden?
The biggest challenge is by far financing new trails and the lack of a national framework. Anyone can call themself a guide, put up a sign and say that this is a blue or red route. (Of course you have to have land owners permission).  Anyone can build a jump without any kind of demands for warning signs. There is no one, no authority, that has taken the lead to say that the development of mountain biking should follow this or that rule, this or that recommendation. It is really like the wild west. Luckily, we have smart, talented regions, destinations, organisations, persons, trailbuilders, and so on, that seek what help there is. People that want to do it the right way and to build sustainable trails and areas.
When it comes to developing mountain biking financially, there is a very big gap between how much money that can be applied for making national cycling routes on paved roads, and in comparison, hardly nothing to develop trails in the forest. Although survey after survey shows that people want to ride bikes in the forests, or at least away from traffic. Despite the fact that children definitely don’t want, or should, ride bikes along roads.
I just like to say that IMBA is doing a great job and that I hope that Sweden can organize it´s cycling self soon, so we can be a member as a country.