The Take Care of Your Trails campaign highlights the work of many volunteers as well as some of the best trail crews we have around Europe. Aside from getting the most boots on the ground, the ‘Outstanding Local Trail Crew’ award takes into consideration the crews that are creating positive change in their community through…

We were extremely pleased to award the MTB Utrechtse Heuvelrug trail crew with the title of ‘Outstanding Local Trail Crew (runners up)’ 2022. This crew is an inspiring example for other crews that sometimes have to row against the current for a long time to be successful. Another admirable quality of this crew has been how the group of volunteers has developed from a few local pioneers to the enormous group of permanent volunteers that there is now.

The story of MTB  Utrechtse Heuvelrug

The volunteers of the MTB Utrechtse Heuvelrug foundation are involved in many areas. In recent years they have played an important role in the construction of new routes, they take care of the management and maintenance of the routes on the Heuvelrug on a daily basis. Their efforts have created a large Trail Crew of enthusiastic volunteers who, with great dedication and pleasure, ensure that many MTB’ers can enjoy the beautiful trails on the ridge. A lot of communication is done to their supporters, but also to other user groups in order to increase support for the MTB sport. With the construction of a special children’s route, the future of mountain bike sport is also being worked on. With the sale of vignettes, the site owners are relieved of their worries, there is sufficient money to build and maintain routes. The land owners receive a contribution for their hours and a considerable part of the money goes to beautiful nature projects on the ridge. The foundation has a number of real ambassadors on the board and among the volunteers who ensure good contact with the land owners. In addition, the volunteers also regularly roll up their sleeves to help other recreational groups or to make an effort in nature conservation. 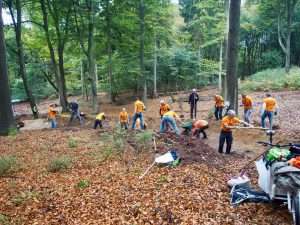 A few examples are the 9 routes that are currently located on the Utrechtse Heuvelrug. Recently there has been a bit of expansion with a private owner. After the storm of June 18, 2021, the volunteers made an effort to restore and open the MTB route as quickly as possible. The last part of the badly hit route Leersum is currently being renovated. A lot of work has been done to bring the relationship with the landowners to a level of mutual respect and trust. This is very important to maintain support for the routes. A number of beautiful nature projects have been made possible in the last few years thanks to a contribution from MTB’ers, biodiversity projects on various heathland areas, extra grazing rounds with sheep herds, the construction of a path for the disabled, construction of a forest edge for biodiversity and a badger tunnel has been constructed. . In addition, a number of beautiful and large projects are in the pipeline. This contribution is highly valued by the land owners. 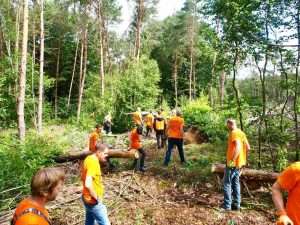 A key to success: Creating a welcoming environment for all

The trail crew knows how to create an atmosphere that makes new members happy to join and they are a valuable community. The insight they have gained that you cannot and do not want to build routes everywhere in the very busy national park in the middle of the Netherlands, indicates that they are aware of the environment and that is of great importance to maintain support. The contact they have with a large following is fantastic and provides many opportunities to communicate well with the MTB community. In addition, the contact that this crew has built up with the terrain owners is of great importance in making it possible to mountain bike in a complex environment, recreational pressure and high natural values. 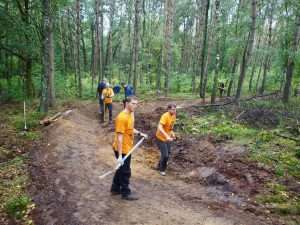