The Take Care of Your Trails campaign highlighted the fantastic voluntary contribution these groups and volunteers make towards their own local trails. It’s also great to see these trail maintenance events are no longer one-off actions but activities that are embedded in the local mountain bike scene throughout the course of the year. We feel the campaign is a really great opportunity to attract new volunteers and/or to generate positive local publicity.

One of our favourite parts about TCoYT is rewarding the crews and individuals who are creating the biggest impact in their local communities and are contributing to positive change in their communities. Aside from getting the most boots on the ground, the ‘Outstanding Local Trail Crew’ award takes into consideration the crews that are creating positive change in their community through…

This year we are pleased to announce the North n Line crew from Italy as the ‘ Outstanding Local Trail Crew’. The crew will receive a Specialized Levo and supporting grant to help with future trail maintenance events. There were many great entrants into this award category, so naturally making a decision to only reward one team was hard! Therefore we will be awarding the following two crews as runners up in this category:

The runners up will receive a grant to help fund their crew/associations future trail works. A big thank you to Specialized Bicycles for funding these fantastic prizes!

The team of lecco Mtb trail project was formed in April of 2021, on that occasion we were asked to participate at a Hackathon for tourism organised by the municipality of Lecco, and Legambiente at the Polytechnic University of Milan. Everything took shape with winning this contest of ideas, but the roots had already been planted many many years before. North N Line, our non-profit sport association (A.S.D. senza scopo di lucro) is a group of friends who have shared the passion of mtb for several years, and by the time we won that contest we were already involved in illegal trail building activities on some routes and trails around Lecco and for the most part in the territory of Monte di Brianza, where we tried to establish a similar but smaller project with the local municipalities of that area but it unfortunately vanished due to the pandemic. 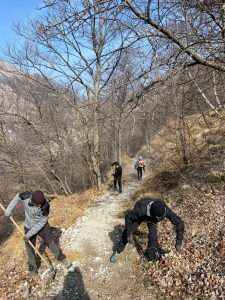 Back then the group relied on a local Sport association ‘Sport è salute Valgre’ in Valgreghentino (LC), under which the ‘Lecco Mtb Trails’ subsection had been opened and began to take the first steps of the project.

Our mtb trail project consists in collaborating with the public and the private sector to make actual change happen on our trail network. The first collaboration began with the municipalities of the province of Lecco. We often see trail work as something that many associations do, but not in a consistent, organised way that you might see in other countries. Quite often positions within these associations remain vacant for a long period of time, letting nature reclaim the trails due to neglect. We put ourselves on the first line to tackle this huge problem and we’re trying to reorganise the way in which trail works are approached. Subsequently, the neighbouring municipalities contacted the group to identify, regulate and manage new paths and cycle-excursion routes that are part of the local trail network. Of course it is only when tourists show up, do these munici[alities begin to grasp the challenge of managing the trail network. We push towards a system where it’s not just regulated and well signed but the network is being implemented, well cleaned and managed during the entire year. 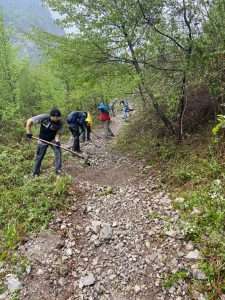 In the meantime, North N Line has reopened a mountain biking group within the Italian Alpine Club section of Lecco, through which a ‘trail table’ in the trail commission has been created aimed at arranging a routine maintenance interventions on the path and trail network managed by the municipality and CAI Lecco. We also implemented the views/ideas of I.M.B.A. Italy, which deals with regulating and reporting routes and is in contact with supporting members regarding the development of the trail network and education on the trails.

The intention linked to the tourist offers is to enhance our local areas, for example the set of ski resorts of which the territory of the province of Lecco is rich, but which are going to be lost in view of climate change. Only one out of five remains open in the winter and relies on artificial snow making due to scarce precipitation and low elevation (1660 metres). We want change to happen and we want this business to remain open and be resilient against climate change making a transition to an all year bike friendly destination.

Inclusivity and building partnerships with other user groups

The key to forming better relationships with other user groups and land managers was just lightening a matchstick. What do we mean? No one ever thought that something like this was possible, maybe because nobody ever questioned the Alpine Club which has been historically the main trail association in Italy. Something that has really opened eyes to people are e-bikes! Back in the days some trails were only used by hikers and mules, now even with technology and progress many more places are more accessible by bike. E-bikes are for sure a way to let people access and discover our mountains more easily.

Inclusivity and building partnerships are two other things that makes our project be recognized and appreciated by many people, also by climbers and hikers. Trails are for everyone and need to be shared. Trails are part of our common value and culture and so they must continue to be improved.

With Legambiente, Save the Lake and I Ragni di Lecco (CAI Lecco) we like to embrace the good of the community within clean up events. Inclusivity is also one of our priorities, we are trying to build a good mountain biking community around Lecco and lake Como where people feel good about the environment. Anyone and everyone is invited to come along and lend a hand at our trail building days and events. We’ve often argued with the directory of the CAI because they wanted trail work events with only their affiliates, this is something we didn’t accept and this is why we made it possible so everybody can actually come, help and at the end of the day share a beer all together and feel part of something that is making a positive change.

Lecco is a small city in the Southern Alps of Italy, it lays on the south east branch of lake Como and is surrounded by mountains. It’s well famous for its alpine climbing history and it’s definitely a big outdoorsy community. We are bikers but know very well all the other activity groups around Lecco, such as climbers, kayakers, skaters and so on… When there’s a problem and a hand is needed, we try to find a way to help each other.  What comes from the mountains ends up in the river. Italy, despite being one of the most developed countries in the world, has to fight a lot of illegal littering techniques, we often find a lot of trash along the side of the trails. Some are very old and can be seen even in the most far out trails. This is why we need partnerships with other volunteer groups such as Legambiente, Save the Lake, Italian Alpine Club and Corpo Nazionale Alpini.